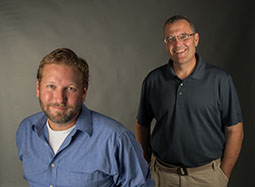 This story was published on Ohio University’s newsletter, Compass.

Editor’s Note: Content in this article originally appeared in the fall/winter issue of Ohio University’s Perspectives magazine, which covers the research, scholarship and creative work of faculty, staff and students.

Many American physicians know that they need to do a better job of helping the veteran population. When Todd Fredricks, a physician with Ohio University’s Heritage College of Osteopathic Medicine, and Brian Plow, an associate professor and associate director for undergraduate studies in the Scripps College of Communication, joined forces to create a tool student physicians could use to better understand their future veteran patients ─ they knew they had found their answer ─ a documentary film called “The Veterans’ Project.”

Due out in January 2017 for educational use, the documentary is produced by “Media in Medicine,” a collaboration of visual media and medicine between Fredricks and Plow to create and teach through stories.

“If we teach people to ask the right questions, maybe we will get better care as an outcome,” said Dr. Fredricks.

The inspiration for the documentary came from research produced by Dr. Fredricks, who found that civilian doctors often don’t fully understand the physical and emotional trauma of combat or know what common issues to watch for in these patients.

Dr. Fredericks presented his findings at professional conferences and published them in a medical journal. However, he knew that he could only reach a certain audience of colleagues using these methods. He wanted to spread the message more broadly and connect with medical students and physicians who needed to hear it most.

Brian Plow is attracted to stories about “smaller, hidden topics that are not getting attention.”

“There’s a strong opportunity to make an impact,” Plow noted.

Plow, whose previous work focused on social justice issues, wasn’t familiar with the two communities—medical practitioners and veterans—that he and his producing partner would need to work with for the project, which gave him some pause. However, Dr. Fredricks’ experience as both a physician and a 24-year military professional helped the duo gain access to documentary subjects.

During the documentary process, Dr. Fredricks learned how to operate the camera and other equipment.

“That’s been an important asset,” Plow said. “Dr. Fredricks is sometimes able to travel to interview documentary subjects when I can’t.”

Dr. Fredricks said that he relished the chance to learn the technical side of filmmaking, and he appreciates its effectiveness as a storytelling format.

“I love the power of film when it’s done beautifully,” he said. “Having the opportunity to do the film from a medical research position is very intriguing to me.”

Both faculty members agreed early in the project that the veterans’ interviews would serve a dual purpose: as documentary sources and as subjects of a qualitative research project designed to document and analyze service personnel experiences with combat and health care. As a result, the documentary interviews are conducted in a systematic, consistent manner so the team can collect viable research data as well as compelling stories for the film.

Both the filmmakers and veterans spend time vetting each other before agreeing to participate.

“Once they see that we have a clear and unique intention, the reception is very good and they are very generous with their stories and time,” Plow said.

The filmmakers have a standard set of questions for each participant, which they provide in advance of the shoot. The veteran is filmed against a black backdrop with simple lighting.

“The subjects tend to launch into an eloquent and moving recounting of their experiences,” Plow said.

Though the interviews are standardized for the sake of research integrity, the filmmakers also seek opportunities to shoot additional footage of the veterans’ lives in order to paint a more complete and honest picture of them for the documentary. The subjects have been fairly amenable and have allowed the filmmakers to capture family dinners or birthday parties.

As for the veterans’ interactions with the health care system, Dr. Fredricks said that the most common theme that they see are false assumptions on the part of clinicians.

For example, a veteran recounted how his local physician assumed that he was seeking heavy painkillers for a fractured spine problem, when the patient wanted only to refill an ibuprofen prescription.

Dr. Fredricks has found—in the interviews and research—that clinicians also don’t understand Veterans Affairs services, including how veterans can easily access them.

The goal is to produce a feature-length documentary.Several medical schools already have expressed interest in showing the documentary to their students.

The Ohio University team has gathered enough compelling material to potentially produce documentaries on additional, related topics as well. For example, the flight medics have unique experience treating soldiers in combat. The duo has received permission to use existing and new footage shot by the medics in future films.

Other researchers have expressed interest in expanding on his study of physicians’ awareness of and comfort level with veteran populations as the documentary project moves forward. Such expansions could include surveying larger or different groups of doctors or examining issues such as emotional trauma or chemical exposure.

The duo also sees potential in teaching their research and documentary process to others so that medical schools could use it for outreach and education for variety of medical matters.

“You can do legitimate research in a beautiful way,” Fredricks said. “The elegance of the format can help build knowledge.”